Pushing Air in a Porsche for a Cycling Record 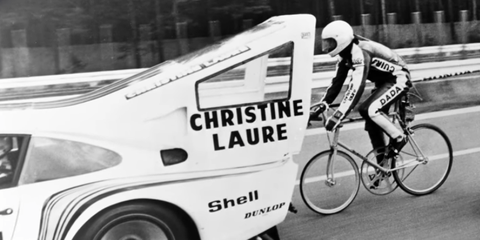 Porsche.  Jean-Claude. The first image that comes to mind is of a grinning “Muscles from Brussels” behind the wheel of the latest 911 RSR in a scene for his latest action film. In a way, that’s not far from the truth.

Followers of a TV show featuring a slightly dotty British motorcycle racer and adventurer of sorts, Guy Martin, may have seen an episode where he straps himself to a bicycle and attempts to reach almost impossible speeds being in the slipstream, the dead air behind a truck. Looks great, sounds great, it’s been done before.

In 1962 José Meiffret from France achieved the then unheard of feat of reaching over 200km/h on a bicycle. The car involved was the classic Mercedes-Benz 300SL. The venue was a German motorway, perhaps one of the best locations for a safe attempt at high speeds.

The idea is to take advantage of the empty space in the air behind a vehicle. In normal riding there is the air itself to contend with, with drag, wind, and the resulting buffeting that affects the stability and forward velocity. By being in a kind of vacuum or a bubble, if you will, and at a distance behind the vehicle that varies depending on the size and shape of the vehicle itself, higher speeds can be achieved.

Just a few years later and an American medico, Dr Allan Abbott, achieved an incredible 223 km/h behind a hefty 1955 Chevrolet. “The Flying Doctor” managed this on the famous Bonneville Salt Flats. These, it seems, inspired German born Jean-Claude Rude to make an all out assault on the record. His aim? 240 km/h. What was needed, in his opinion, was a combination of a fast car and a fast car driver.

Twenty three year old Rude was part of a bicycle racing team and the head of the group contacted a Le Mans racer and French compatriot, Henri Pescarolo. With a decent percentage of wins to appearances (four wins from thirty three), he was certainly up to the task. But he was skeptical of Rude’s idea, however was eventually won over thanks to the boundless enthusiasm Rude showed in their meetings.

The next step was to find a suitable vehicle. Enter Porsche. Specifically a Martini Racing Team, 800 horsepower, 935 Porsche. As quick as this wondrous machine was, it needed some mild modifications to ensure it would be the right vehicle for this audacious attempt. 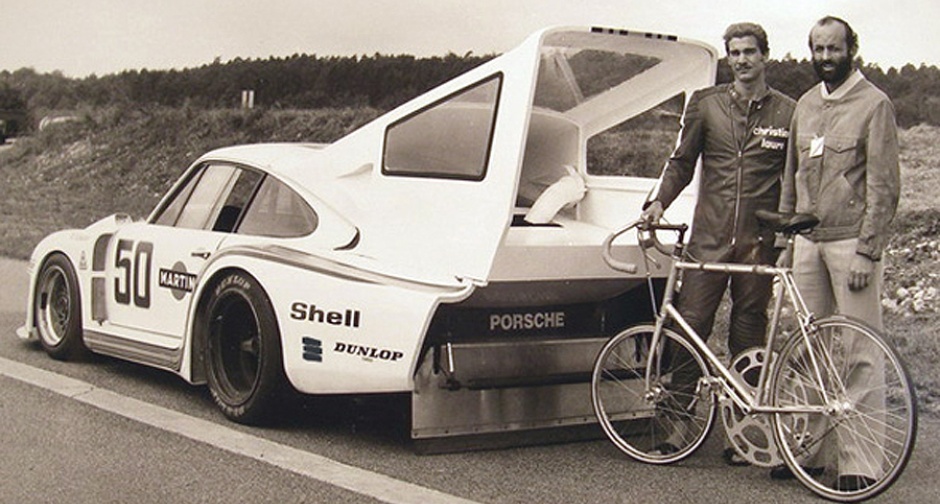 Engineers designed an addition to fit on the rear on the 935, a trapezoidal shaped box. Testing showed that this would prove to be the ticket to allowing Rude to make the attempt. A roller on the back of the car would allow his bike to effectively be right on the rear bumper and well within the slipstream of the 935.

But the bike, the bike. If Jean-Claude Rude was to reach 240 km/h then his chariot needed to be able to deal with the attempt. Mathematicians salivated at the prospect of working out gear ratios, cog diameters, and the like, with the end result seeing Rude’s bike modified to have a smaller front wheel than the rear, and a front pedal cog nearly the same size as the front wheel. The rear driver cog itself was reduced in size, with the result being one chain revolution would have the bike cover an astounding 27 metres in distance. However the sheer mechanics of this means that the human leg was almost completely unable to provide enough pressure to turn the front cog to get the bike underway. Rude’s solution was to have a motorcycle push the bike with a lance. Then came the issue of just where to try to make the attempt. Autobahns were out. Salt flats weren’t suitable. A Volkswagen test track, the Ehra-Lessien site near Wolfsburg, would be settled upon. However, even this wasn’t ideal.

“We realised straight away that it would be difficult”, recalls Henri Pescarolo. “There was a corner at the beginning and at the end of the straights.” This meant that the push and the tow needed to be carefully calculated to enable Rude to be pushed along at a speed that could match Pescarolo’s velocity. In a 800hp turbocharged Porsche from a racing team.

Somehow it all worked. Rude got underway, as did Pescarolo. Both enter the corner and speed is at 150 kph. Both line up for the straight and speed slowly increases. Disaster. ‘Speed wobbles’ intrude and Rude loses control. The rear tyre breaks loose and gets entangled in the frame. Rude lay the bike flat and keeps control of everything, emerging, amazingly, unscathed. Pescarolo recalls: “That was the end of the record attempt, but we were extremely relieved that nothing happened to him”

Rude would go on to attempt another speed record in 1979. This involved reaching the highest speed, then at 154 kph, over a distance of 100 metres. Unfortunately, Rude would crash here and miss out on this record by a mere thousandth of a second.

Sadly, Jean-Claude Rude would pass away in 1980. Another speed attempt was being undertaken, using a train as ‘the tow’ but the turbulence unsettled the balance and he was fatally injured,  meaning he would never get to achieve his goal of being the first man on a bicycle to reach 250 kph.